In the our previous two chapters we have seen for loop and while loop. 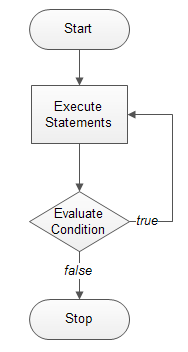 Difference between do..while and while loop :

Sometimes we need some special kind of loop which should execute the loop body for infinite times. Loop whose body keeps executing infinite number of times is called as infinite loop.

In the above example, the condition part is replaced with the integer 1. i.e condition will be always non-zero number so loop continues its execution for infinite time until stack overflow occurres.