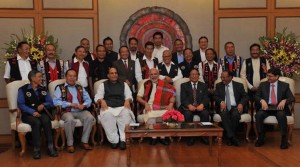 The signing of the pact is the end of over 80 rounds of negotiations that spanned 16 years with first breakthrough in 1997 when ceasefire agreement was sealed.

RN Ravi inked the document on behalf of the Union government, while NSCN (IM) chairman Isak Chishi Swu and general secretary Thuingaleng Muivah were the signatories on behalf of the Naga organisation.

However, NSCN-Khaplang (NSCN-K), the faction of the NSCN which broke away in 1988 was not part of the settlement.