The President of India Pranab Mukherjee on 21 April 2015 released a Postage Stamp commemorating the 200 years of the Orthodox Theological Seminary or Old Seminary, Kottayam in Kerala. 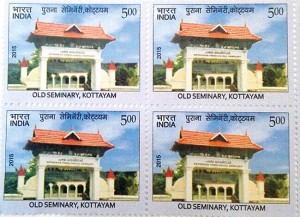 What is the Old Seminary?

This is a heritage monument recognized by the Government for its importance as a two hundred year old quadrangular edifice where English education was started for the first time in Kerala.

It was the first indigenous initiative towards universal literacy and education and was set up by the Malankara Orthodox Church situated in Kerala.

The Seminary also has to its credit several developments like Cottayam College, which was the first English teaching institution in the State.

The first printing press was also established in the premises and scholars of the Seminary took active part in standardizing the common Malayalam Script.

Benjamin Bailey along with Hermann Gundert, were among the pioneers of the development of modern Malayalam language and script.

The credit of translating Bible into the first Indian language, Malayalam, also goes to the Seminary and College under the leadership of Benjamin Bailey.