Weeks before Prime Minister Narendra Modi is scheduled to make his first visit to Maldives on March 15, former president of Maldives – Mohamed Nasheed was arrested on terrorism charges. This happened almost exactly two years after he had walked into the Indian high commission, seeking refuge and creating an embarrassing situation for the UPA government. 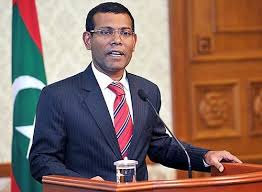 Nasheed was in India last week, where he expressed apprehension of just such an arrest and even hinted at seeking asylum in India.

Maldives has been in recurrent turmoil since Nasheed’s ouster in a thinly disguised coup in 2012.

Though, India is not likely to intervene in the internal matters of Maldives, it will watch closely to make sure that stability in Maldives does not take a hit again. Instability in the small island nation has in recent years made Maldives a happy hunting ground for “outside powers”, like China and even the US.

According to Maldives media, he was arrested on a criminal warrant, ostensibly so he does not flee the island before his trial. “He was arrested on terrorism allegations for having arrested and detained Abdulla Ghazi, the chief judge of the criminal court during his administration,“ said media reports from Maldives.