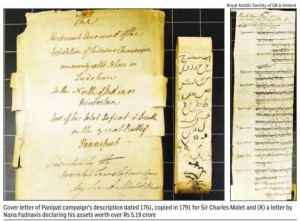 Image of the documents

A document of 1796-1800 in Nana Phadanwis‘ own handwriting has been found in England. In the document Nana makes a note of his assets worth over five crores and nineteen lakhs. This amount would worth several thousand crores today.

The letter is part of a collection of over 200 documents pertaining to the Maratha Empire. These documents are lying unseen at the Royal Asiatic Society (RAS) of Great Britain and Ireland in London.

Sir Charles Malet, a British resident at Poona, took his own collection to England in 1797 when he resigned from the East India Company and his successors handed it over to the RAS.

Then Lieutenant Colonel (later General) John Briggs claimed he was given these documents when he was a resident at Satara and later published two articles based on them around 1830, before handing them over to the RAS.

This discovery was made by Uday Kulkarni – author of Solstice at Panipat: 14 January 1761.
Kulkarni said “I owe this discovery to the efforts of RAS’s retired librarian Kathy Lazenbatt,”.

Kulkarni had visited the RAS in 2013 to obtain scanned copies of the documents.