Former chief minister of Bihar Nitish Kumar took oath as the state’s CM for the fifth time, at Patna’s historic Gandhi Maidan. Ceremony was witnessed by opposition leaders from across the country.

Nitish Kumar was administered the oath of office and secrecy at the Raj Bhawan in Patna by governor Keshari Nath Tripathi.

The ceremony was referred as Largest show of anti-BJP unity after Narendra Modi became Prime Minister. In a major show of strength by anti-BJP parties, the event was attended by a galaxy of opposition leaders from across the country.

Prime Minister Narendra Modi, who had led the Bihar campaign from the front, was represented on the dais by Union minister M Venkaiah Naidu

RJD chief Lalu Prasad’s son Tejashwi Prasad Yadav took the oath immediately after Nitish, being allotted the portfolio of road construction and later designated as deputy chief minister. He is the youngest ever deputy CM in the country at the age of 26. 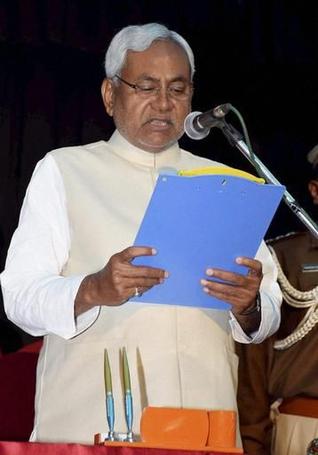