A French scientist claimed to have discovered a different portrait hidden behind that of the Mona Lisa following 10 years of analysis using reflective light technology.

Pascal Cotte claimed that Leonardo da Vinci’s most famous work contains a figure that has neither the direct gaze nor subtle smile that the painting is known for. 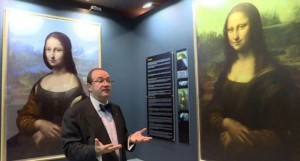 The Mona Lisa – a painting that is thought to have been created between AD 1503 and 1506 – is currently at the Louvre. It is regarded as the most valued painting in the world with its insurance value – adjusted for inflation – being at $782 million.

Art historian Andrew Graham-Dixon, who has made a new BBC documentary called ‘The Secrets of the Mona Lisa’, has suggested that the find could lead to the name of the painting being changed. “I have no doubt that this is definitely one of the stories of the century,” he said.

However, the museum authorities have declined to comment on the scientist’s claims.

Cotte was granted access to the painting by the Louvre museum in 2004 and pioneered a technique called Layer Amplification Method to analyse it. The method involves “projecting a series of intense lights” onto it.

The subject’s expression, which is frequently described as enigmatic, the monumentality of the composition, the subtle modeling of forms, and the atmospheric illusionism were novel qualities that have contributed to the continuing fascination and study of the work.