Egypt on 6 August 2015 unveiled a major expansion of the new Suez Canal. 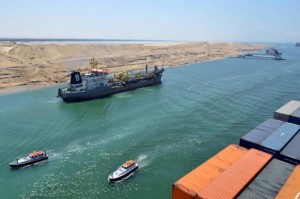 It was inaugurated by Egyptian President Abdel Fattah al-Sisi in a ceremony held at port city of Ismailiya, located on west bank of canal.

This new waterway is expected to boost the traffic that passes through the canal. The project got completed in one year span with an estimated cost of 8 billion US dollars.

What is Suez Canal