Super 30 founder and mathematician Anand Kumar was honoured by Legislature of British Columbia in Canada at Toronto University for his pioneering work in the field of education. 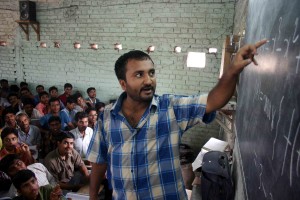 Anand Kumar in his class

The 42-year-old Kumar was honoured for his rare achievements for the students from India’s underprivileged sections.

The Speaker Linda Reid honoured Kumar with a memento and also appreciated his endeavour at a proposal initiated by Marc Dalton, an MLA.

Kumar was invited by the British Columbia Government in recognition of his work through globally acclaimed Super 30, which has mentors 30 students mostly from the underprivileged sections of the society for IITs free of cost for the last 14 years.

Who is Anand Kumar?